The Belgian Crown’s Insignia of Knight for HH Sheikha Intisar 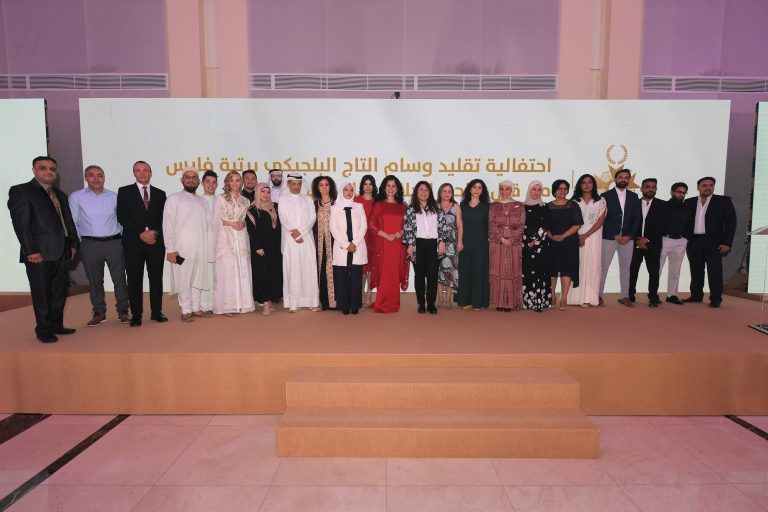 The Belgian Crown’s Insignia of Knight for HH Sheikha Intisar

His Majesty King Philippe of the Belgians has awarded awarding the insignia of the Knight in the Order of the Crown (Chevalier de l’Ordre de la Couronne) to HH Sheikha Intisar AlSabah, a philanthropist, social entrepreneur, author, film producer, columnist, and princess of the AlSabah Family, the ruling family of Kuwait.

The decoration ceremony was held at her residence on May, 31st, 2022.

The honour is awarded in recognition of HH Sheikha Intisar AlSabah’s humanitarian and philanthropic work in the fields of education through positive psychology, women’s self-empowerment, and bottom-up Peacebuilding, both in the Arab world and globally.

HH Sheikha Intisar AlSabah, founder of Intisar Foundation, Alnowair, and Bareec, said, “I am beyond grateful to His Majesty King Philippe of the Belgians, Her Majesty Queen Mathilde, and the Minister of Foreign Affairs of the Kingdom of Belgium for recognising and commending my work. I have been committed to building a more Peaceful Arab world by encouraging positivity among young people and providing psychological support to Arab women traumatised by war and violence. It is because I am a firm believer that achieving better mental health and applying positive psychology can significantly contribute to humanity’s greatest cause – Peace –  and enable it to flowchart from the Arab world, reaching and affecting all of humankind. I am therefore pleased that the Kingdom of Belgium considers that my life’s work attests to my devotion to the ideas of unity, tolerance, and human rights.”

H.E. Marc Trenteseau, ambassador of Belgium to the State of Kuwait said, “Of course Belgium and Kuwait are good trading partners, but more than that, we share common values, like the necessity of good neighbourly relations, the primacy of international law on the rule of the jungle, respect for individuals and Human Rights. Furthermore, the respect of gender equality, the alleviation of sufferings of innocent victims of human violence is of paramount importance to the Belgian Authorities. This award acknowledges the considerable service given by the princess and her foundation to these values and to the cause of victims of war in Arab countries throughout the years, especially women and children. Her endeavor and dedication are well known and are much valued by the Belgian Authorities and by HHMM King Philippe and Queen Mathilde. It is therefore a great pleasure for me as Ambassador of Belgium to the State of Kuwait to bestow upon HH Princess Intisar the decoration of Chevalier de la Couronne (Knight of the Crown) on behalf of his majesty King Philippe.” 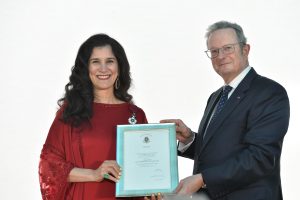 Throughout her life, HH Sheikha Intisar has been committing her time and effort to humanitarian causes related to health, education, women’s empowerment, child protection, and human rights.

In the MENA region, she is known for her active humanitarian work towards a vision of a Peaceful Arab world and for being a very ardent defender of children, young people, and women, bringing much needed relief to those in need, especially due to the continuous periods of violence in Arab countries over recent decades.

HH Sheikha Intisar’s Intisar Foundation is the first charitable organisation to provide drama therapy sessions to women traumatised by war and violence in the Arab world it is registered Charity Commission for England and Wales. Intisar Foundation has been hailed for developing and introducing an innovative and scientifically-proven approach to the field of bottom-up Peacebuilding that effects a long-term, systemic change by enabling the psychological recovery and self-empowerment of women traumatised by war and violence. Furthermore, HH Sheikha Intisar has launched the One Million Arab Women initiative, a 30-year-plan to alleviate psychological trauma in one million Arab women.

To date, Intisar Foundation has implemented over 174+ virtual and field drama therapy sessions, reaching 100s women in Lebanon and Jordan and thousands of indirect beneficiaries. In addition, it has published research papers in international journals which confirm the qualitative and quantitative impact of drama therapy on vulnerable populations. Furthermore, the foundation will expand the pool of qualified drama therapists in the Middle East by providing scholarships for female Arab students at the USEK, Lebanon.

Karima Anbar, CEO, Intisar Foundation, added, “HH Sheikha Intisar AlSabah has an impressive track record when it comes to making a difference. I am proud to be part of her mission as the CEO of Intisar Foundation where we developed a pioneering and innovative bottom-up Peace building process. Research findings prove that women’s psychological health affects the entire household. By self-empowering women, we ensure that future generations and communities are resilient and less prone to violence and we contribute to building a bottom-up Peace process. This medal is very well deserved for HH Sheikha Intisar as she contributes to making this world a better and more Peaceful place every day.”

Founded in 2013, Alnowair is Sheikha’s Intisar and the region’s first non-profit organisation dedicated to promoting positive psychology and positivity as a way of living that leads to overall mental wellbeing. Alnowair’s aim is to bring a positive social behavioral change across the community, fields of education & environment by transforming positive psychology research findings into interactive programmes and behavioral campaigns.

Gaja Kruchlik, Director, Alnowair, said, “Sheikha Intisar AlSabah, and her belief in the human potential and positivity as a driving force in making the world a thriving place has left an everlasting impact on me, on my team and all the people whose lives she has touched. At Alnowair, for the past 10 years, we have been working on bringing positive social behavioural change in Kuwait, and we are very proud of the fact that today through meaningful steps, sustained deliberation, and collaborative work, we have helped make mental health and its importance a household subject in Kuwait.”

Bareec is the first and only educational NGO from Kuwait to have presented their work to the United Nations. In January 2020 HH Sheikha Intisar provided an overview of the impact of positive psychology on academia, social behaviour as well as on mental wellbeing on students as well as teachers in the schools that have implemented the programme.

Bareec has conducted +20 trainings and reached +500 educators. Bareec is being implemented in 47 public high schools, reaching more than 11,600 learners. It has been included in the human development state plan of New Kuwait Vision 2035 by the Supreme Council for Planning and Development and has been approved by the Ministry of Education of Kuwait in its new five-year plan for the development of education.

Rokaya Ali Hussain, Director General, Bareec, said, “With an unprecedented passion, Sheikha Intisar smartly and scientifically motivated state officials for Bareec to become part of the State of Kuwait Development Plan. In collaboration with the Ministry of Education, the number of public high schools applying the programme grew exponentially up to 47 schools, training more than 500 teachers and outreaching more than 11600 students. Bareec became a daily fulfilling activity that educators, learners and parents could harvest its ripe fruit immediately after implementation.”

In a belief that media and art are particularly effective in influencing behaviour and attitudes, HH Sheikha Intisar has also been committing her work as an author, film producer, and columnist to spread the message of Peace, humanity, and social responsibility as the main pillars of any meaningful change across the world. Her media publications, published art books, and released award winning films have been promoting wellbeing and personal growth, high ethical standards and values, her Kuwaiti heritage, as well as furthering women’s empowerment in the Arab world and beyond.